Power-over-Ethernet for Connecting to The Internet of Things 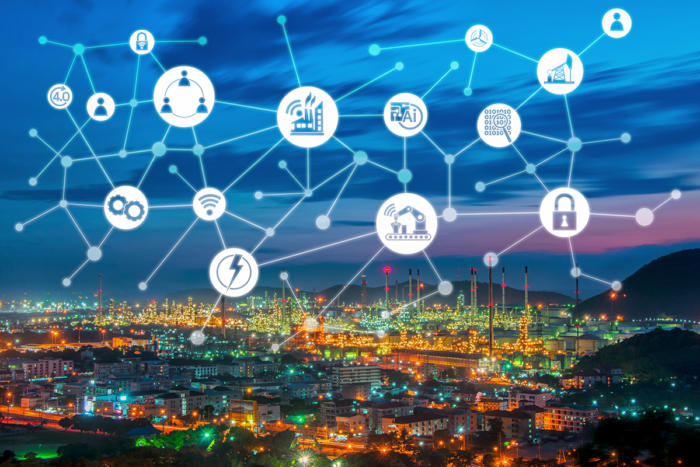 The Internet of Things (IoT) continues to bring people, processes, data and things together in a variety of environments. From enterprise spaces to entertainment venues, the IoT is expanding to include a host of intelligent devices such as LED lighting, security cameras, and WiFi access points.
As more of our devices are become intelligent devices, Contractors and IT professionals are turning over to Power over Ethernet cabling (PoE). As means of powering and also controlling the multitude of intelligent devices connected to their network.

What is Power-over-Ethernet?
Power-over-Ethernet is a means of carrying power and data to a device using copper communications cabling. The main advantage of Power over Ethernet (PoE) is delivery of data AND power over one Cat5e/Cat6 Ethernet cable. PoE ends the need for AC/DC power supplies and outlets. A remote installation costs less than fiber as no electrician is required. Ethernet cable costs less and is often already installed in buildings. A 2013 study conducted by the IEEE found that Power-over-Ethernet was twice as efficient at distributing power as traditional electrical cabling, reducing the power lost in the channel by at least half.1 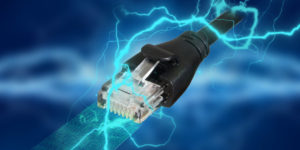 When should PoE be used?
Power-over-Ethernet is used to power and control many types of intelligent devices including LED lighting, HVAC and climate control systems, IP security cameras and access controls, IP televisions and displays, and WiFi access points. PoE allows you to add a device in awkward or remote locations. PoE is not recommended for sending network data over long distances, or for extreme temperatures unless industrial designation is present.
For building managers, IT professionals and contractors tasked with installing and managing possibly hundreds of intelligent devices, PoE offers a simple solution. Not only does it provide more efficient power and data throughput to the device compared to traditional cable setups, and a potential for cost savings as a result, but it also allows for a variety of digital devices placed throughout an environment to be powered and controlled utilizing a single communications network.

The increase popularity of PoE
With the continuous development and growth of the Internet of Things and the increase in interconnected, data driven devices within an enterprise, PoE cabling has become very popular. In 2014 alone, PoE saw an uptake of 80% in VoIP applications. In the same year, a reported 30% of CCTVs, 20% of access controls and Wi-Fi access points, and 10% of lighting were powered by PoE.2

Types of Speed Offered by PoE
PoE costs less than fiber and is delivering higher and higher data speeds.
Thanks to widespread adoption of IEEE 802.3bz technology, manufacturers are spending more on product development. Data delivery rates are now at 1 Gbps (10/100/1000 Mbps) over Cat5e and Cat6. The new IEEE 802.3bz standard has the capacity to deliver speeds of 2.5 to 5 Gbps over 100m with an immediate view toward 10 Gbps.
High-definition streaming only requires 400 Mbps. A network could easily stream a training video while others work and check email.
PoE has more than enough data speed to support devices in a small LAN.

With the growth of Internet of Things (IoT) and the continued development of interconnected, data driven devices the implementation of PoE cabling seem endless. Contact Customized Computer Services, Inc. to find out we can help your company improve its efficiency by using Power-over-Ethernet cabling to connect to the Internet-of-Things.